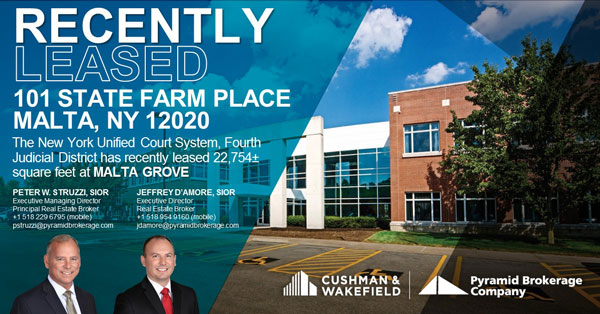 The New York Unified Court System, Fourth Judicial District has recently leased 22,754 square feet at the former 101 State Farm Place in Malta, New York, recently rebranded as Malta Grove. The Fourth Judicial District is comprised of eleven counties and is, geographically, the largest of New York State’s judicial districts. This transaction represents both a relocation and expansion for The New York Unified Court System who is relocating from 65 South Broadway, Saratoga Springs. The building is conveniently located seconds off Exit 12 of the Adirondack Northway, providing ease of access for all employees.

Peter Struzzi, SIOR and Jeffrey D’Amore, SIOR of Cushman & Wakefield | Pyramid Brokerage Company of Albany represented the Landlord, Malta Grove LLC, in the transaction.  Struzzi and D’Amore are the exclusive leasing brokers for the two-story 116,000± SF Class A office building.

If you would like more information regarding Cushman & Wakefield | Pyramid Brokerage Company, or how to lease space at Malta Grove, please refer to their website at www.pyramidbrokerage.com