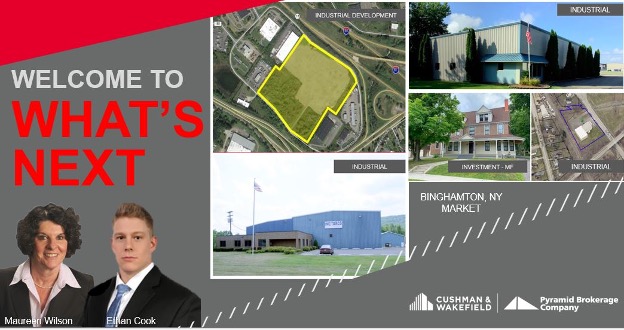 In May 2021 brokers Maureen D. Wilson, Vice President for Business Development, and Ethan Cook, Director of Sales, closed on five properties in the Binghamton market, including four industrial sites. The largest deal was the purchase of 52 acres at 265 Industrial Park Drive in Kirkwood, occupied by a 428,000sf industrial building constructed in the 1960s for research and development. The buyer will be constructing a new 500,000sf state-of-the-art distribution facility. The development company was represented by JLL of Pittsburgh and Pyramid Brokerage Company of Syracuse.

Wilson and Cook also brokered the sale of a 50,000sf heavy industrial complex at 13 Spud Lane to Don Orall’s Garage, a truck repair service, which will, in turn, be leasing one of the two buildings on the site to Burr Trucking in a transaction also brokered by the Wilson/Cook team.

With the cooperation of a referring broker from KW Pittsburgh, the Pyramid Brokerage team sold 1690 Route 11 from the Lupo’s Spedies family to EZSOLAR, a solar farm development group that will use the 8,300sf building to stage their installations.

407 Airport Road, Endicott, an 11,000sf building was sold to Richard Rome, owner of a bath and kitchen remodeling company from the Scranton area. Rome will be opening a warehouse and showroom location to support the company’s move into the Triple Cities market.

The month was rounded out by the investment sale of 23 Front Street, Binghamton, a restored Victorian that is leased to Binghamton University students.

Ethan Cook commented that: “This activity shows the strength of demand in the industrial market and the breadth of the rebound in the commercial real estate market, locally.”